You are here: Home › area of autonomy › APPEAL OF THE WOMEN OF THE FEMINIST ECOLOGY MOVEMENT-1974 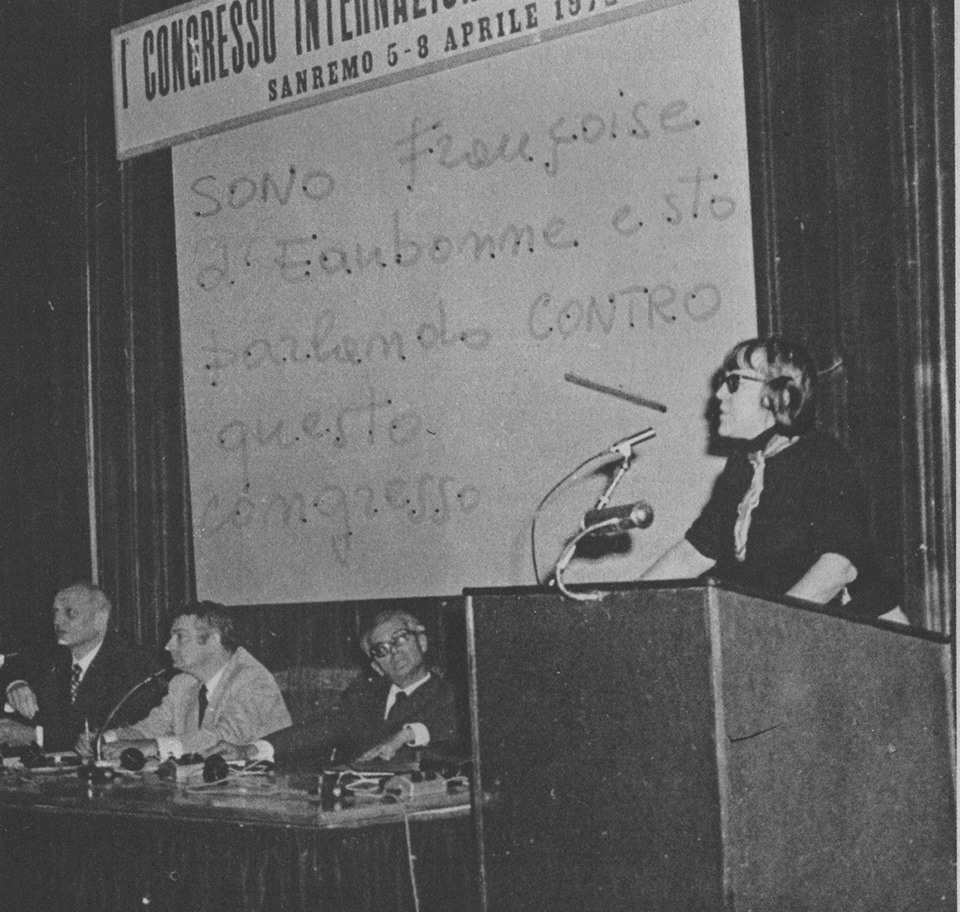 Francoise d’Eaubonne, FHAR leader, originator of the concept of “eco-feminism” and supporter of the urban guerrilla in West Europe disrupting the 1972 Sanremo Congress of Sexology.

WHEREAS the greatest danger which menaces our planet and our species in the very near future has two aspects, overpopulation and the destruction of resources, which is to say ecological catastrophe;

(whereas this danger presents itself as the destruction of resources in the capitalist countries, the socialist countries are none the less moving towards the same abyss with the progress of their industrial development);

WHEREAS the world of overconsumption feels most profoundly the evil of urban concentration and the destruction of the environment, and the underdeveloped Third World the evil of overpopulation, they are both in different capacities subject to the same catastrophe of demographic inflation and the death of the earth:

WHEREAS the one is getting ready to succumb to excess and asphyxia, and the other vegetates in starvation, they do not envision any road forward, other then the one, which has via industrial development made the capitalist camp gravely ill.

WHEREAS these various observations illustrate a society that is sick and demented. Even in its revolutionary efforts which merely change the political regime and NEVER put into question the profound mental structures: work ethic, appropriation, murderous industrial expansion and above all the HIERARCHY OF THE SEXES and the predominance of men over women based in the patriarchal system and the family unit;

WHEREAS China, which has gone the farthest in a sincere antagonist and anti-sexist effort, has only done so at the cost of a total contempt for the realities of sexuality, culminating in the castration of the individual and appropriated the same model of industrialization which repeats the universal error of society.

WHEREAS the capitalist world has further exposed its monstrous hypocrisy, in announcing an anti-natalist campaign..to the THIRD WORLD while it contests, curtails, refuses or “legalizes” our right to contraception and abortion, in its terror to ensure that we are controlled in our subordinate, manipulated and controlled feminine condition.

WHEREAS this ecological and demographic menace-seven billion by the year 2000!-is not only the result of male society-capitalist or socialist but its two aspects are the DIRECT effect of the two masculine appropriations which in antiquity founded the patriarchy:

–the appropriation of fertility (the seizure of land from women).

–the appropriation of fecundity (the discovery of paternity).

Resulting as a matter of course in the over-exploitation and over-population of the earth, without the least consideration for the earth or for women;

WE THE WOMEN OF THE FEMINIST ECOLOGY MOVEMENT, DECLARE:

A) our resolution to take in hand, with the control of our personal destiny, the demographic issue, in solidarity with our sisters in the Third World, and our will to hunt down and fight, on all levels, in the family, in employment, in the school, on the street etc, the universal system of patriarchy, which binds together ALL THE OTHER aspects of our oppression.

B) our resolution in particular to fight by all means the insane construction of nuclear power plants, which are allegedly intended to replace certain energy sources, but in reality are for the arms industry and for profit.

C) our DECISION (as the first warning) to announce and to organize a maternity strike of ONE YEAR by those of our signatories (the majority) who are capable of reproduction. Each of whom is to induce a great number of women from various countries to follow our example.

And this is just the beginning. We will continue until a massive awakening of feminine consciousness, firstly concerning how the demographic crisis intersects with the disregard for our condition, and the destruction of the assets of LIFE of which we are the custodians.

Our species can have a future only through the triumph of our liberty and of our despised values over male civilization; by the cessation of the demographic explosion, the limitation of useless “productive” work, maximum reforestation, the destruction of the nuclear power stations and all war industries and most importantly THE TOTAL AND IRREVERSABLE ABOLITION OF SEXISM AND THE PATRIARCHY