You are here: Home › area of autonomy › Communique on Action against Guido Rossa-Red Brigades January 1979 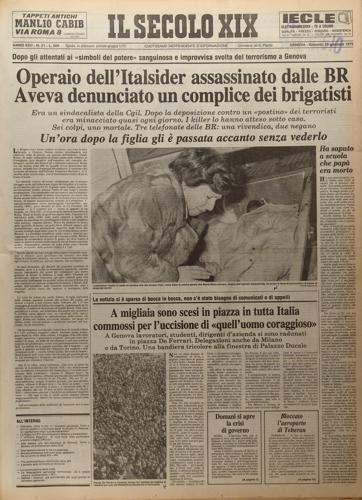 On Wednesday January 24th at 6:40 an armed unit of the Red Brigades executed GUIDO ROSSA a spy and informer within the Cornigliano ITALSIDER factory where to better carry out his miserable task he had infiltrated among the workers disguised as a delegate. To this end he had moved from notorious rightist positions to the ranks of the Berlinguerians. Although the execution of spies nestled in its ranks has always been a principle of the proletariat, it was the intention of the unit to disable the spy as the first and only means of negotiation with such miserable people: but the stubborn resistance of the spy made every negotiation useless and consequently he was executed. His class treason is even more wretched and stupid considering that power first uses its servants, encouraging their work than disposes of them.

Comrades, since the guerrilla has began to root itself within the factory, the Italsider management with the valuable contribution of the Berlinguerians has set itself the task of reconstructing a network of espionage, utilizing old and new informers together; on the one hand it has repurposed fascists and Christian Democrats on the other it has increased hiring of ex PS and CC, further it has utilized those Berlinguerians who are ready to implement their counter-revolutionary line to its furthest extreme:

TO THE EXTREME OF BETRAYYING THEIR OWN CLASS, OF SENDING A WORK MATE TO JAIL WITHOUT QUALMS

The goal which power seeks to accomplish through this network of espionage is not only the propagandized one of “hunting the brigadists and the so called fellow travellers” but a broader and more ambitious one of identifying and annihilating any worker strata which express class antagonism within the factory.

The entire movement of proletarian resistance is now within the crosshairs of this terror campaign, unleashed by power and supported by the drumbeat of its Berlinguerian lackeys: this witch hunt strikes not only those who read and circulate the propaganda of the combatant communist organizations, but also those who fight restructuring, anyone who rebels against the neocorporative line of the unions, anyone who dialogues with the armed struggle even in words alone, without joining the general chorus of “blame and condemnation”. A conformation of all this comes from Ansaldo where as has already happened at Fiat and Siemens, the Berlinguerians have provided management with a list of the names of workers who are “suspected brigadists” also compiled on the basis of interventions made in the pre contractual assemblies.

THIS IS THE ESSENCE OF THE BERLINGUERIAN POLICY WITHIN THE FACTORIES, THE ATTEMPT TO DIVIDE THE WORKING CLASS CREATING A CORPORATIVE STRATA PRIVELEGED AND SUPPORTING THE BOSSSES TO SET AGAINST THE OTHER STRATA OF THE CLASS AND PROLETARIANS

We remind those who are inclined to this sordid maneuver, the various Rossas and all the aspiring spies, that one is not a proletarian by right of birth but by virtue of the interests one defends, and it is with this criteria that we know how to distinguish as always who is a proletarian and who is a class enemy.

Within this project, Rossa formed part of the Italsider espionage network, as a member of the internal surveillance project established by the union leaderships to assist company security in the tasks of anti-worker repression. THAT WAS HIS REAL JOB!! The great moment in which he reaps the fruits of such constant and quiet work comes on the day he is able to offer up to power a worker he knows and has worked together with for years, the comrade Franco Berardi “guilty” of having had propaganda from our organization in his hands.

The conformation of the direct relation between the spies and management can be seen from the fact that Rossa after having tailed comrade Berardi for hours together with his worthy associate Diego Contrino, GOES DIRECTLY TO MANAGEMENT to denounce him putting the factory council which had been split when the union bosses had imposed a political cover for espionage operations in front of a fatti accompli.