You are here: Home › Uncategorized › Be Silent Today and All Light Will Be Gone Tomorrow-1982 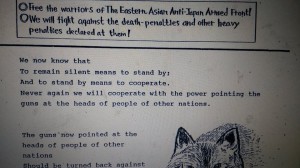 October 29th 1982 publication of the Coordinating Committee to Support the Eastern Asian Anti-Japan Armed Front in Struggle against Death Penalties and Other Heavy Penalties Declared at the Warriors and to Win in the Court of Appeal.

“The four persons we introduce here volunteered to be part of this Eastern Asian Anti-Japan Armed Front. They tried to carry out anti-Japan armed struggles from within the Japanese imperialism. They used bombs in their illegal urban guerrilla struggles to destroy the Japanese Imperialism. Through these struggles they wanted to negate by deed their own being as victimizers of Asian people as they themselves belong to the imperialist Japan; at the same time they wanted to liberate themselves from the ruling class of Japan who exploits and suppresses them.”