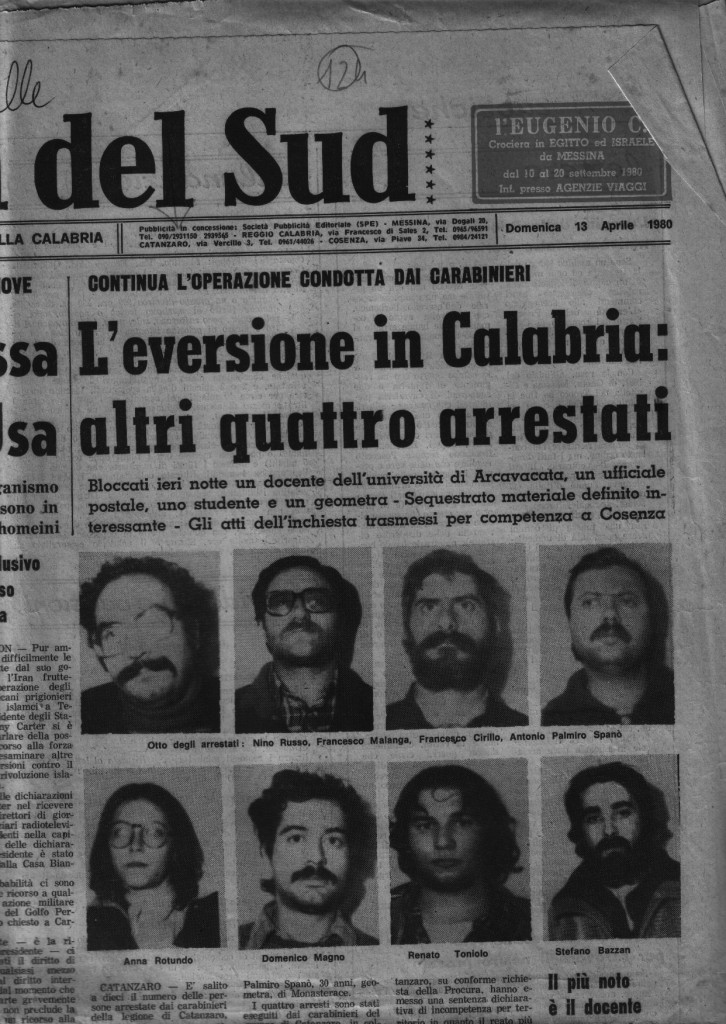 The organization PFG is formed on the initiative of militants from various collectives in the Southern area of autonomy around the journal Comunismo at the end of 1977. The militants of this grouping are particularly interested in reopening the unsolved history of the Southern question in the context of the centrality of the Mediterranean.

Although concentrated in time, the armed interventions of the PFG involve a wide range of targets:

-Industrial associations and organizations: The facilities of the steel conglomerate Italsider in Taranto;

-The information apparatus: The Potenza regional office of the state broadcaster RAI (December 1977).

On April 5th, 1978 four militants of the PFG are arrested in a Licola apartment.

In the following weeks a wave of repression sweeps through various Southern cities. In particular, combing operations target the area around the University of Cosenza. There are many detentions and arrests. In fact after these operations the signature PFG is no longer used.

In later years some collectives of Calabrian autonomy, who move in the same politico-cultural context face trials on “armed gang” charges which end in the acquittal of the accused. The state investigates a total of thirty people for involvement in PFG.

In December and January of 1979-80 several PFG militants are tried on charges of “subversive association”, receiving sentences of between twelve and two years. At their third hearing on December 17th they attempt to read a declaration entitled “The South, a territory of war” before they are forcibly silenced. They declare “We will never allow the South to be the aircraft carrier, the missile base, the logistical support for armed intervention against the peoples of the Mediterranean.”

In 1981 the PFG militants Fiora Pirri and Lanfranco Caminiti publish the book Diritto alla guerra (The Right to War) which examines the Marxist critique of political economy from the perspective of an attack on appropriative-authoritarian development of the productive forces and Western modalities of knowledge.