You are here: Home › area of autonomy › BRIEF HISTORY OF THE COLLETTIVI POLITICI DEL VENETO (CPV) 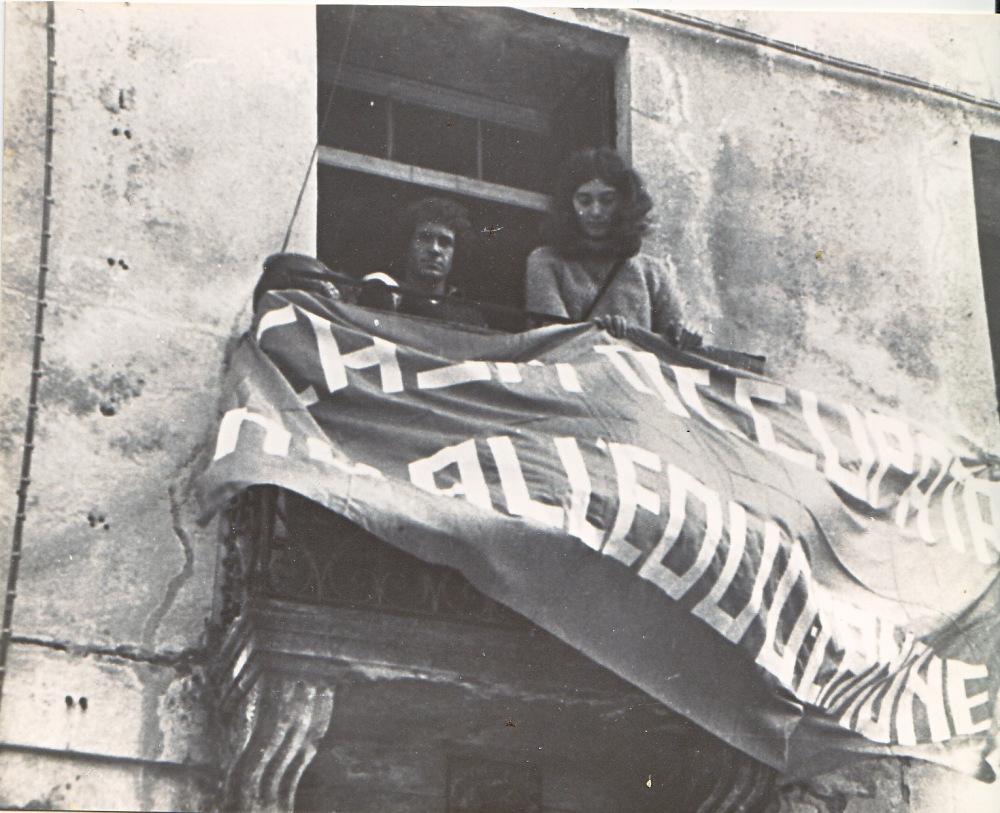 After the dissolution of Potere Operaio at the Rosolina conference (Rovigo, 31 May-3 June 1973) the majority of the Venetian militants of this organization – with the exception of sections in Venice and Verona -carry out a debate which leads, between 1974 and 1975, to the formation of a new political area: the Venetian Political Collective for Worker’s Power (CPV).

The political and organizational structure of the CPV revolves around certain issues:

-The importance of being rooted in the local area.

-The necessity of using violence.

-Action as a party.

-Dialectical debate with the [other] politico-military organizations

Within this system particular attention is given to precarity as a work-form of the new cycle of production and the concepts of the “homogeneous zone”, the “diffuse factory” and the “liberated territory” are elaborated.

Between 1977 and 1978 action is directed against restructuring and command over labor in the factory and the territory and against the university system. In this context wounding attacks with firearms are made on;

As well as numerous acts of sabotage including against rail cars owned by industrial conglomerate Zanussi-Rex (Pordenone 30-6-1977) and firebomb attacks against the headquarters of the Veneto regional Inspectorate of prisons (Padova 20/10/1977).

The strong impact of the movement of 77′ leads the CPV to begin promotion of the Organized Communist Movement (MCO) following the Bologna conference in September 1977 in order to conform to the two requirements of forming a national political force (Organized Worker’s Autonomy) and retaining territorial specificity.

The so called “night of fire” is a local implementation of the political designs of the MCO. In the night between December 18-19 of 1978 attacks are carried out against the following targets:

-The headquarters of the Schio Industrial Association.

-The residence of the president of the Rovigo Industrial Association.

-The Venice offices of Intersind [the employers’ organisation for state-controlled companies].

-The HQ of the Industrial Association of Vicenza.

-The Regional Federation of Veneto Industrialists in Mestre.

-The Artisan’s Association of Rovigo.

In the Autumn of 1978 the magazine Autonomia and a interview with Radio Sherwood in Padua gives voice to the groupings around the CPV. In the same period there “matures a deeper political and organizational relationship with the autonomous collectives in Milan and Turin who edit the magazine Rosso, in a search for greater homogeneity and a new political and editorial line it is renamed Rosso per il Potere Operaio.

In response to the wave of arrests during the investigations for the so called April 7th trial, around twenty armed attacks are carried out against paramilitary police barracks in the Veneto region between the 29th and 30th of April 1979.

In the context of this campaign on the 11th of April 1979 in Thiene, three militants of the CPV-Communist Combatant Front, Maria Antonietta Berna, Angelo Del Santo and Alberto Graziani are killed while handling an explosive device. A fourth militant Lorenzo Bortoli is arrested and allegedly commits suicide in prison.

In October 1979, the CPV carries out several attacks against branches of FIAT (Padova 10/30/1979) in retaliation for the termination of 61 workers at Fiat Headquarters in Turin.

On December 3rd, 200 armed militants of CPV blockade the road intersections of Padova.

During 1980 and 1981, intense police repression, internal political conflicts in the collective and the political collapse of the hypothesis which was the basis for the foundation of the MCO, leads to the exhaustion of the CPV as a political experience which is stated at the Venice International Congress in the autumn of 1981.

In this final period the CPV claims the following actions:

-Attack on the barracks of the 4th Battalion of the Carabinieri with a rocket launcher (Mestre 04/17/1981).

-Abduction and detention of Luigi Strizzolo boss of the Montedison petrochemical complex in Porto Maghera. He is photographed with a sign around his neck reading “I am an exploiter of the working class” and the photo is distributed to newspapers (Venice 22-10-1980).

The CPV utilized various acronyms to claim responsibility for actions over the course of its history, these included:

On March 9th in Trieste, the fugitive CPV militant Pietro Maria Greco is identified by a team of Digos [General Investigations and Special Operations Division] and Sisde [Intelligence and Democratic Security Service] agents and killed.

The State prosecuted 205 persons for membership in the CPV.