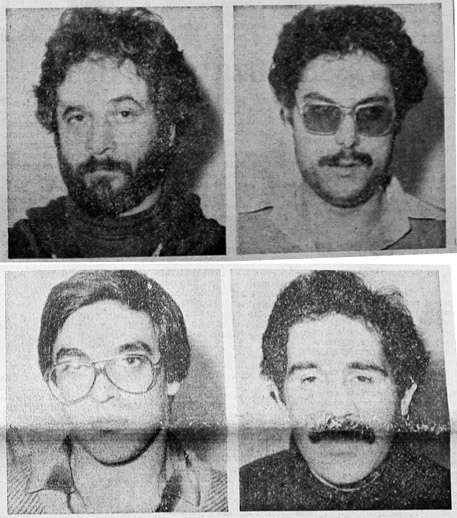 The name Barbagia Rossa makes its first appearance 27 March 1978 in a claim of responsibility for a firebomb attack carried out the previous day against a vehicle used to transport prisoners.

On November 3, 1978 Barbagia Rossa carries out an attack on a radiogoniometer station in Siamaggiore (OR).

In January 14, 1979,Barbagia Rossa announces a “Campaign against the militarization of the territory” making numerous incendiary attacks against carabinieri [paramilitary police] barracks in Nuoro and its surroundings (Lula, Orani).

In the claim of responsibility the organization provides its self definition:

“Barbagia Rossa, as a political and military vanguard emerging in this area, takes charge of the strategic project of armed struggle for communism:

– Working to overcome the spontaneous stage and episodic attacks;

– Aiming at the creation of an organization that is able to intervene and operate within any contradiction, in any concrete situation in the region;

– Working to become a politico-military point of reference for the entire Sardinian proletariat “.

The document concludes with an explicit reference to the formulations of the Red Brigades, whose slogans are repeated.

On December 16, 1979 at Sa Bassa janna (Nuoro), the police arrive at a sheep farm, during a meeting of shepherds and militants of the movements of the Sardinian left. This results in a shootout in which the wanted millitants Masala Francesco and Giovanni Mario Bitti are killed.

Two leaflets of the BR (Red Brigades) are found on Bitti’s person. These are the claims of responsibility for fatal shooting attacks against paramilitary police officer Vittorio Battaglini Mario Tosa (Genoa 11/21/1979) and against the police NCOs Michele Granato (Rome 09/11/1979) and Domenico Taverna (Rome, 27/11/79) .

Some of those arrested as a result of this operation are known leftists from various communities in Sardinia.

On February 15, 1980 in Cagliari, a police patrol recognizes two militants of the Red Brigades (Emilia Libèra and Francesco Savasta). The latter, in order to escape arrest, engage in a gun battle.

In the following days a major police operation leads to the arrest of several militants of the revolutionary left in the city of Cagliari, Sassari and Nuoro.

The two firefights (that of 12/16/1979 and that of 15/2/1980) and the political positions of those arrested show that the dialog between the Red Brigades and some formations of the Sardinian left – started in the summer of 1979 based on a plan (never implemented) for the liberation of political prisoners from the Asinara special prison – and was further developed.

In February of 1980, in Cagliari and other cities of Sardinia, many leftists are arrested in a repressive campaign against the Sardinian Red Brigades and Barbagia Rossa.

Between June and August of 1981, Barbagia Rossa intensifies its actions against the militarization of the territory, two are killed:

– Nicolino Zidda,worker in the agricultural colony of Mamone (Orune 09/06/1981), the target stated in the communique, however, was a policeman who Zidda was in the vicinity of at the time of the attack;

On February 23, 1982 in Nuoro police seize a large cache of weapons shipped to Barbagia Rossa from the Red Brigades on information from “repentant terrorist” Antonio Savasta. After these events the name Barbagia Rossa ceases to appear in claims of responsibility for armed actions.

The state prosecutes 28 people for involvement in Barbagia Rossa.