You are here: Home › area of autonomy › ON A DISCUSSION ABOUT “SUBJECTIVISM” AND “MILITARISM”-1980 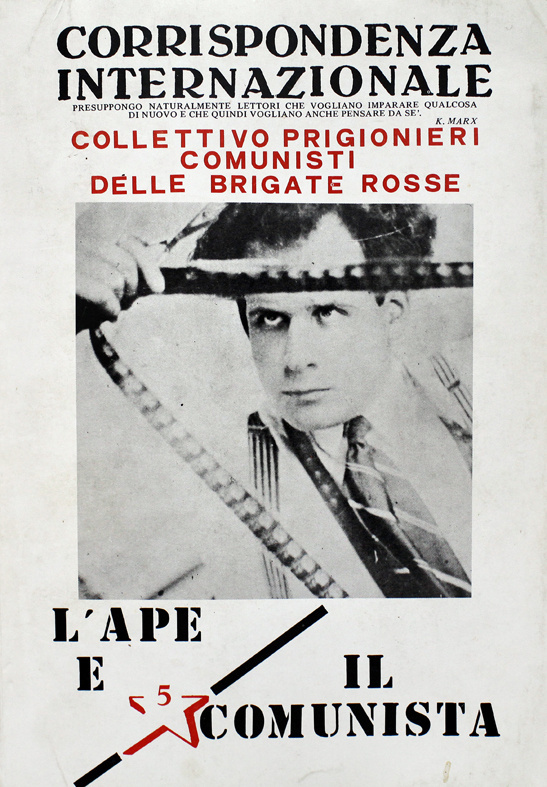 The following is a document sent by militants of the Red Brigades prisoners in the jail of Palmi, against economist, subjectivist and militarist tendencies in this issue of Corrispondenza Internazionale we are only publishing a translation of the last part of the documents

The period in which we are living is certainly characterized, as we have said by the dominance of the political. In other words the struggle is waged from the side of both the bourgeois and the proletariat first of all on the political terrain, because what is at stake is maintenance or qualitative transformation of the relations of production.

While it is nonsense to speak of the “autonomy of the political”, a total “autonomy from politics” is on the contrary essential for the metropolitan proletariat, from the bourgeois, from the imperialist state, as a necessary precondition for the construction of its own antagonistic structure of power, conceived as a relation and directed towards the transformation of all social relations, firstly the relations of production.

The question therefore becomes: What in its essence does the power exercised by the proletarian side consist of? In breaking the monopoly of force exercised by the State and in its own practice of militarily organized force?

On the one hand the imperialist state acts by all means to prevent their emergence, on the the other, the metropolitan proletariat encounters difficulties in clearly identifying them, which consequently inhibits their conscious appropriation as a historical project of revolutionary transformation, a program.

The Combatant Communist Organizations, the revolutionary movement in general, are a materialization of this pressure on the terrain of the class struggle, but they display only a partial consciousness of this [pressure] being unable to recognize its possible forms.

Moreover internal to the imperialist metropole, the “subversive” relations of production cannot “live” on the economic level, as occurred with the rising bourgeoisie in its interiority to feudalism, hence they are limited to a virtual existence and operate only on the political level, as anticipatory program, as a material force organized on the terrain of power, in order to impose itself.

During this period of transition, the main objective of the revolutionary practice of the Combatant Communist Organizations is to focus on these virtual, possible, latent, potential relations of production already maturing and contained within the materiality of the present and to translate them into a communist program.

This capacity is related to the need to win and mobilize broad sectors of the metropolitan proletariat to the perspective of anti-imperialist civil war. The transition to communism is neither a mechanical consequence of the “collapse of capitalism”, nor is it merely the fatal conclusion of a military engagement.

For that reason both mechanical determinism, and economist and militarist subjectivism are compelled to admit their incapacity.

Freedom from the constraints of the present, the transition of the real relations of production into the possible ones is something different from demanding a “social wage against the State.”

It is something other then this arithmetical conjugation.

It is a conscious design of these possible [relations of production] according to the level of development of the forces of production; It is a political prefiguration fixed as program;

It is the translation of this program into a revolutionary power which unfolds during a thousand battles pointing towards its realization.

Without a program explaining the social objectives of the war, it is impossible to mobilize all the proletarian sectors with an objective stake in it. Without such a proletarian mobilization, the development of the war becomes impossible.

Militarism is defenseless against this vicious cycle.

This program on the other hand does not emerge out of nothing, ten years of proletarian struggles, of practical and radical criticism of the factory and the capitalist social formation have already produced a rough draft of its contents, which can be summarized as follows:

-Reduction of labor time: Work for all and less work; extensive liberation of social time and development of the conditions for its advanced use.

-Recomposition of mental and manual labor, of study and work, for everybody and throughout life.

-Overthrow of the practice of power and flow of planning of collective objectives, at every level of social life.

-Restructuring of production and the human-nature relation in accordance with collectively determined and historically possible use values.

-Repositioning of our social formation in accordance with the principles of a authentic proletarian internationalism.

A condition of this program is the overcoming of capitalist relations of production, I.e production based on exchange value.

Utopia is meaningless. We are dealing with a program which as Marx would say “does not leave the pillars of the house standing” with thoroughly developed principles. It is a program which is continually alluded to by the most conscious proletarian struggles which violently break with the immanent and conservative tendencies of capitalist development and and result in antagonistic clashes with the state.

However it is a question of a unaccomplished program which experiences its most developed identity internal to the revolutionary struggle.

Proletarian power grows together with this experience, whose diffusion is the task of the revolutionary organizations. This is the decisive task of action as a party in the present conjuncture!

This is a difficult task because while trying to recompose the metropolitan proletariat into a singular project of social transformation, one must take into account the multiplicity of sectors of which it is comprised, and which have historically developed separate paths, if not even separate “identities”.

This is why it is necessary for the general and the particular to live within revolutionary practice in a recomposed dialectical unity which cannot be flatly reduced to one of its moments.

The general program of the metropolitan proletariat and its immediate political program are inseparable and necessary moments of this need.

In other words the immediate program is the specific content of the political mobilization of every proletarian subject towards class war for communism, but it exists in reference to the general political program which lives as a unifying substance in every particular proletarian struggle.

Not linear, discontinuous, but allowing each of its components to cooperate in the creation of the material conditions required to exert its dictatorship.

Because it is worth remembering, revolution means overthrowing; overthrow of the positions within relations of power, hence the transition from a subaltern to a dominant and leading position, must necessarily be accomplished through a violent break, a tear, starting from “politics” and returning to the relations of production, affecting all the old social relations along this distinctive path.

Evolution does not occur in relation to revolutionary transition, an age is over and the new pitilessly buries it!

This is what militarist subjectivism does not understand because it underestimates and sacrifices political, theoretical and organizational initiative to the reductive practice of destruction.

This practice, comrades, should also be condemned for another decisive reason: It carries within the metropolitan proletariat an “original sin” of the capitalist mode of production, the separation between political and military, thought and action.

Internal to the capitalist mode of production, the technical division of labor appears within the relations of production as a political separation between manual and mental labor, which is identified with and polarized between different social figures who contend with one another for power.

We must conduct an incessant battle against this separation, against its residue in every militant, in every site of politics, every variable of the proletarian system of power, until the appropriation of consciousness, mediation and mental processing, can be produced as necessary and recomposed steps of the daily practice of revolutionary transformation of the present state of things.

Our criticism towards militarism, that it surreptitiously reintroduces the separate forms, on one side of knowledge-power (politicians, theoreticians, spiritual fathers..) and on the other side the combatant executants (the fighters) is not tactical but involves the foundations of the metropolitan revolutionary process.

The expropriation of knowledge by the proletarians of the metropole is much deeper then a limited education, because it [knowledge] states a decisive condition of their subordination. Knowledge is opposed against them as power, command embodied in machines, command hierarchy, the rule of the intellectuals and technicians and moreover the most perfidious form of the leadership of the “organic intellectuals” and the “new political class”.

The reappropriation of knowledge is the result of revolutionary practice and no organization calling itself communist can underestimate it.

The reconstruction of social individuals through the recomposition of their practice is not a problem to be solved in the future. It concerns us today and develops along with the process of revolutionary struggle, which transforms the objective world at the same time as it transforms those who carry out this transformation.

Communists and the development of communism are not two separate processes. Work as Engels said with a famous paradox produced man. Labor within capitalism has decomposed him into multiple, extraneous, reified and antagonist figures.

Revolutionary work already within this phase of destruction of the “illusory community” can and must now reconstruct social individuals, artificers, and producers of any future “real community” on a proletarian basis.