You are here: Home › area of autonomy › BRIEF HISTORY OF THE REVOLUTIONARY COMMUNIST COMMITEE (COCORI) 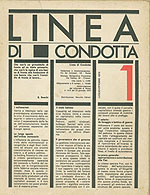 Their area of political and cultural reference is that revolving around the magazines Linea di Condotta (1975), and Senza Tregua (1975 to 1978).

At least initially, the political interventions of the CoCoRi occur on the legal terrain. However, according to the legal judgment of 16 July 1983 in the Criminal Court of Milan, they formed many armed nuclei claiming their attacks with different acronyms, the most common of which are:

In Turin, June 19, 1976 they carry out a wounding attack against Paul Fossat, department head at Fiat Rivalta, claimed with the signature Class War for Communism, marking the beginning of the interventions of CoCoRi in the Turin factories. In Milan the first action attributed to CoCoRi is the wounding attack on Valerio De Marco, Head of Personnel for Leyland Innocenti (11.11.75), claimed under the signature For Armed Proletarian Power: Class War.

In early 1976, in Milan, the following actions are attributed to CoCoRi:

– Against black market work;
– Against heroin trafficking;
– for housing.

On 9 June 1978 a robbery at a bank in Lissone, culminates in the death of the militant Francesco Giuri.

In the campaign against repression the CoCoRi claim responsibility for:

-Bomb attack against the police station being built in Concorezzo (Milano 1/12/78).

-Firebomb attack on the vehicles of the security firm “Cittadini dell’Ordine” (Milan 25/07/78).

On February 23, 1979 in Barzanò (CO), the security guard Scalia Rosario is killed during a robbery carried out by Cocori.

In Veneto, between the end of 1976 and the first months of 1979, the Cocori operated mainly in Padua. In addition to expropriations they claimed the wounding of Ezio Riondato, Professor of Moral Philosophy at the Faculty of Letters and Christan Democrat President of the regional bank,Cassa di Risparmio (Padova 04/22/78).

The CoCoRi, in Rome, are formed at the beginning of 1978 out of the remnants of the Roman Communist Committees (CoCoRo), which, in turn, were formed following the dissolution of Worker’s Power (1973) and, among them at least until 1975, the Centocelle Communist Committee (CoCoCe) was particularly active at which point it largely merged with the Armed Communist Formations (FCA) or the Red Brigades (BR).

The Roman CoCoRi operated in Tiburtino, Rome-South, Rome-North. In July of 1978 they held a organizational conference in Lanuvio (Rome), where, according to a witness, it is decided: “that the legal apparatus of Cocori is discontinued and all the activity is to be carried out on the illegal level, as has already happened in fact in Milan and Padua.”

The formal dissolution of the Cocori national network is decided in Milan in December 1978. Subsequently, some former militants of this organization, operating under the name Organized Workers for Communism, operate between the beginning of 1979 and the first months of 1980, mainly carrying out expropriations.

According to a witness, in the first half of 1980, among members of the Organized Workers for Communism, “the question arises whether and how to proceed. The question was to join Front Line (PL) or dissolve. [..]”

The prevailing position is to stay out of PL and continue in the practice of expropriation.

In some court cases this latest trend is united to the informal grouping – which also includes some former militants of the Armed Proletarians for Communism – known as the Communist Robbers. In court the attempted disarming of 18 December 1980, in Zinasco (PV), which ends with the death of security guard Alfio Zappala is attributed to the later.

The state has prosecuted 92 people for involvement in the activities of the Revolutionary Communist Committee.