You are here: Home › area of autonomy › Brief History of the Combatant Communist Formations 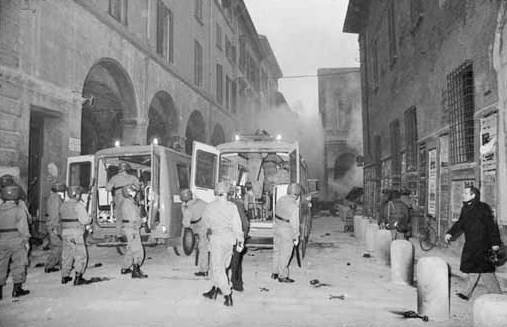 Between the end of May and the beginning of June 1973, the extra-parliamentary group Potere Operaio, announces its own dissolution at a meeting in Rosolina. Some militants of the dissolved organization joining with others from Lotta Continua and from the area of Worker’s Autonomy found the magazine Rosso in March 1973.

At their origins the FCC assert organizational positions already expressed by Front Line (PL). They also seek to build a proletarian army understood as a network of territorial combatant units in a dialectic with a central leadership structure. Between the Summer of 1977 and November 1977 the FCC spreads across the country in a network whose principle points of intervention are Milan, Varese, Bologna, Rome and Avellino.

The most mature experiences of the FCC in the South were at Fiat in Cassino between 1976 and 1977 including the wounding of two labor bosses and sabotage of the power plant resulting in a three day total blackout.

The July 7th 1984 judgment of the Rome Court of Assize observes that: “The FCC in the south was essentially made up of a network of workers above all at the Cassino Fiat, by some militants of the dissolved FCA (Armed Communist Formations), by a group of comrades in the Avellino area, and by the Comitati Operai dei Castelli romani.”

On January 4th 1978, the retired carabinieri major and head of the industrial security services at Fiat Cassino, Carmine De Rosa is executed by gunshot. The leaflet claiming the action is signed Armed Workers for Communism. This signature, one of many utilized by the FCC network-is used only on this occasion.

Among the many signatures used by the FCC, Armed Proletarian Squads (or Proletarian Armed Squads) are of great importance: “autonomous organisms operating in the worker’s committees and neighborhoods with local tasks, self armed and self financing.”

The FCC signature appears for the first time on the 18th of January 1978, in the claim of responsibility for an action against a carabinieri unit on guard duty outside the Novara special prison. In the early months of 1978, the FCC and PL establish a unified national command on the basis of the convergence of their political thesis.

Some campaigns of intervention are carried out in the context of this unified leadership:

Some of these actions are claimed with the signature Armed Proletarian Squads (SAP), others are jointly claimed by PL and the FCC.

In the Summer of 1978, due to divergent political assessments of the Moro Campaign and of how to relate to the Red Brigades, the unified political command breaks down. After the Summer of 1978 the FCC also splits, the elements most sympathetic to the thesis of PL forming the Communist Assault Units (RCA).

In November, 1978 in a dialectic with the campaigns being carried out by the Red Brigades, the FCC of the South carries out a lethal attack on the prosecutor of Frosinone , Fedele Calvosa. In the same attack two body guards and FCC militant Roberto Capone are also killed.

Meanwhile in the Milan area, some militants attempt to “make a qualitative politico-military leap in the armed proletarian squads.”, which in this period carry out many expropriations, as well as several attacks against carabinieri barracks, the traffic police, newspapers, police armored vehicles and data processing centers. In particular:

With the arrests of May 1979, the FCC and the SAP cease to exist. Some militants chose to go into exile, others join with the Red Brigades, and some abandon armed struggle entirely. A nucleus of the SAP participates in the formation of the 28th of March Brigade.

The state investigates 121 people for involvement in the FCC.