You are here: Home › anti-fascism › Social War in Italy-February 1976 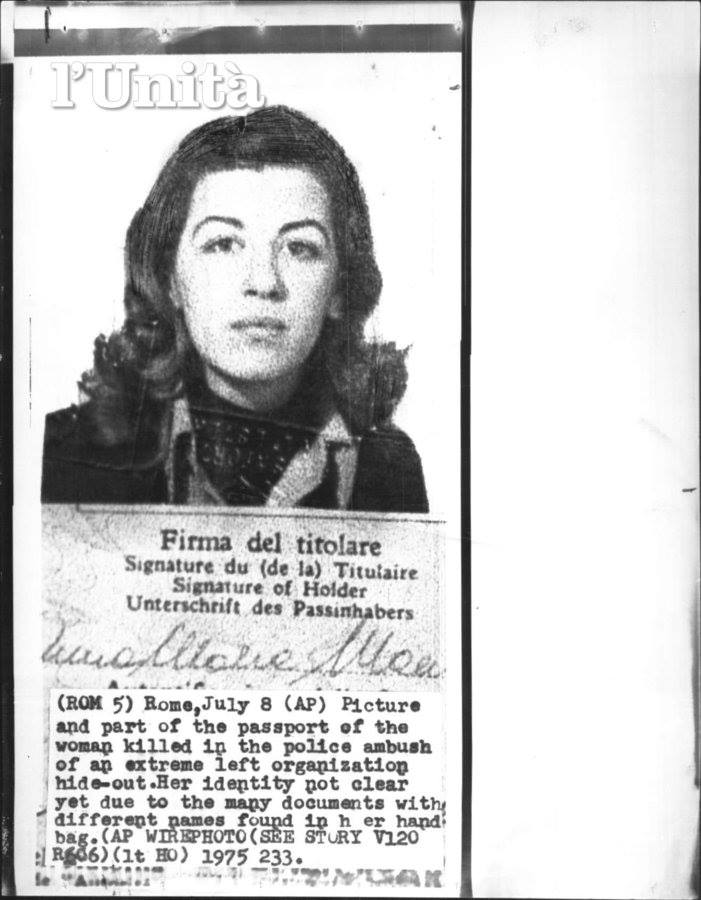 In a document issued by the clandestine paper Lotta armata per il communismo, the Red Brigades identify the carabinieri as their main target because, the carabinieri are “the specific weapons of the bourgeois for struggle against the revolutionary organizations”. In light of this document a series of unclaimed attacks can reasonably be attributed to the Red Brigades. On January 20th in Alcamo two carabinieri are killed while asleep in their barracks. Also on the 20th a bomb was thrown at a carabinieri barracks in Livorno. There is another attack on a carabinieri barracks in Massa on the 13th of February. These attacks will intensify in the months to come.

Thirty neo-fascists of the FUAN (youth wing of the MSI) armed with iron bars and chains break into the School of Jurisprudence and attack a group of students who had staged an exhibition in favor of abortion rights.

Massa Carrara: A powerful explosive device is detonated against the entrance of a carabinieri barracks. The action is claimed by the “Dante di Nanni Assault Brigade”.

Naples: Massimo Abbatangelo a candidate on the electoral list of the MSI with multiple assault convictions, attacks and wounds a union worker of the CGIL.

Rome: Incidents occur in the university district between militants of Communion and Liberation [Catholic fascist organization] and the extreme left. Numerous injuries.

Genoa: Arson attacks against the cars of Enrico Bertinotti from the personnel department of Italsider [a steel conglomerate], Mario Sartori, another Italsider executive and Renato Conti a technician of the transportation firm Ansaldo. The attacks are claimed by the Red Brigades.

Genoa-Ragusa: Several attacks in both cities against control boxes of the state telecommunications monopoly SIP.

Rome: two individuals are surprised by police in the garden of the Egyptian embassy. They open fire with automatic weapons and escape capture.

Milan: Two plainclothes police officers are attacked and beaten during a demonstration of the extra-parliamentary left.

Rome: Deputy Sergeant for counter-terrorism, Antonio Tuzzilino is wounded by two P38 pistol shots in an ambush by NAP (Armed Proletarian Nuclei). In a communique, the NAP states the action was carried out as retaliation for the murder of NAP militant Anna Maria Mantini who was shot in the face by Tuzzilino, the previous year. Tuzzilino will be paralyzed.

Turin: Unknown persons destroy the cars of Dr.Enzio Ponte director of personnel at automotive firm Pininfarina , who is denounced in a leaflet as a “reactionary of the DC, for whom he participated in the election campaigns of 68′ and 70’”, and Giovanni Bettolotri personnel director at the Stura Michelin plant, who is condemned as a “little lackey of management”. There is also an arson attempt at the underground car park for executives in the Mirafiori Sud plant.

Turin: Serious incidents occur between the police and students protesting the non-implementation of the educational reform. Numerous cars are overturned and torched.

Rome: Three militants of Lotta Continua are attacked and beaten by neo-fascists.

Ascoli Piceno: The car of the journalist Carlo Peci, a correspondent for the Messaggero is blown up with a explosive device. Peci had been threatened by fascists on multiple occasions.

Campobasso: A bomb attack causes slight damage to a carabinieri barracks in Baranello.

Rome: A group of extreme left militants attack a district office of the MSI.

Milan: Two fascist militants are attacked and beaten outside of a high school. Five of the attackers are arrested.

Rome: Clashes occur between the police and the unemployed backed by militants of the extra-parliamentary left. Four protesters and a police officer is wounded.

Milan: A sympathizer of the MSI is attacked and beaten by far left militants.

Rome: Eight district offices of the DC and PSDI are attacked.

Benevento: Bomb attack against the home of the Christian Democrat president of the province Francesco Gagliardi.

Naples: Arson attack on the MSI district office in the city center.

Milan: A group of striking workers riot in the offices of Fosfantartiglio and trash them after beating a secretary.

Rome: Vittorio Sartogo a local councilor of the PCI is attacked by militants of the Via dei Volsci collective (part of the area of Autonomy) at the end of a meeting.

Milan: clashes between participants in a anti-abortion Catholic mobilization and a event against repression called for by the counter culture magazine Re Nudo.

Trieste: A group of militants of the Youth Front of the MSI barricade themselves in a bar and throw bottles at passers by injuring seven people.

Milan: Four fascist youth are attacked and wounded with metal bars by militants of the extra-parliamentary left.

Rome: Serious incidents of violence occur on the anniversary of the death of the Greek right wing militant    Mantakas. At the University three left wing youth are attacked by fascists. One of them a militant of Worker’s Vanguard (AO) is seriously injured with a knife. Shortly afterwards two police officers are assaulted by MSI militants. Finally two more left militants are attacked by neo-fascists. One of them is stabbed.