You are here: Home › Red Zora › Second Communique on the Action against the Munster Institute of Human Genetics-Rote Zora 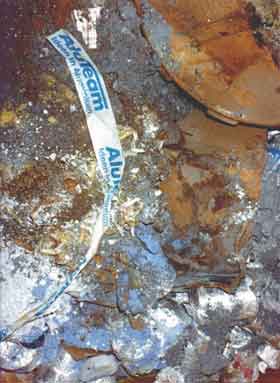 [English translation a slight modification of the draft issued in the Fall 1988 issue of Resistance. German text is available here]

Exploitation, the sexist division of labor and violence against women are for us components of the patriarchal ruling system without which imperialism in the Third World and here cannot be understood.

In the fight against bio and genetechnology we see a key point on which to develop our resistance against this system, against every oppression, for women’s liberation worldwide. We see our struggle here as not separated from the relations which imperialism causes in the Third World, but rather as a concrete, practical anti-imperialism in which we try to hinder the frictionless course of capital’s strategy and its intervention in the structures of the Third World.

The occasion for our action and this publication was for us the fact that human genetics was/is an essential point in the public discussion about genetic and reproduction techniques. The discussion over human genetics mirrors a lack of perspective in the women’s movement at least when it is led like in Berlin concerning ANTIGENA. Where do we leave demands and initiatives, which spring from the framework given by our rulers and their thinkers? Where do we demand our feminist utopias?

The handicapped in Berlin demanded the closing of the Human Genetic Counseling Center. This establishment is the crossroads for the healthy registration of as many people as possible, for the selection of the desirable and undesirable future generation, for the dissemination of the idea that all social problems—from alcohol to allergies, criminality and physical disability—are biological in nature and can be corrected with medicine.

Against the demand of the handicapped, among women there emerged a massive protest: that it is up to every women to decide whether she wants a handicapped child, every women must confront this decision herself and the demand to close the center would be taboo.

Thereby a different taboo is really planted in our heads: the taboo against offbeat thinking about the relations that compose society and against demanding the right to be different then the average: the right to imagine a world free from all propaganda of human-genetic, medical and socio-political scientists; and the right to fight for one, in which the sick and handicapped are integrated. A world in which they are no burden. A world in which the entirety of the sickness producing environmental conditions and social relations are gone.

The propaganda of these human geneticists and the population-politicians and our own fear puts the problem on its head: a toxic waste scandal, an atomic accident, have become an opportunity to boost human genetics and to turn on the victims of the ruling politics.

They say they want to help women. They will receive information which will let them come to a self-determined decision about abortion/sterilization.

But this “self-determination” has its limits—of late, where for example women in psychiatric care, in the special schools, maladjusted women here, and above all the “superfluous” women and women offering resistance in the Third World, where these women refuse to “voluntarily” submit to the population politics of the ruling groups. This fact remains even when all this is meant to be in the “best interests” of the handicapped, special school students, psychiatric patients and the poor in the Third World.

With the help of genetic classification, they will accomplish the exclusion of all who do not unconditionally submit to the normality of the everyday routine of capitalist labor.

It is planned to reduce the costs of care for “sick” children and grown ups according to cost-use accounting. While this problem under fascism was solved through worse care and later extermination of “unworthy” life, the methods of today’s human geneticists are subtler: through their propaganda of “self determination of women, prevention of suffering for the handicapped and their families”, they want women to voluntarily submit to the population policy goals of the rulers.

Women’s need for a healthy child is in the first place, an expression of the situation that now as before in this state, women have the real responsibility for children and therefore, every deviation from the so-called normal becomes a burden on the women. In the economy of the capitalist/patriarchal system women are always a “maneuverable mass” in reproduction and in the labor market, which objectively contributes decisively to a reduction in the cost of wages. Also in this logic women must be productively efficient, I.e have healthy kids which makes them as cost effective as possible for man/capital/state.

Those who go against these plans are threatened by a whole catalog of sanctions: limitation of financial possibilities when the handicapped are not maintained by responsibility groups, e.g sick funds or pension institutions; limitation of individual possibilities when women are solely responsible for the care of the handicapped; social isolation or exclusion-psychiatric/forced sterilization, etc.

Through the offer of precautionary measures and examinations by human geneticists, the fears of women are individualized and channeled away from the ones who are really the cause—like chemical companies, the pro-atomic lobby, toxic waste producers. A toxic waste scandal leads to a demand for broader human-genetic advice in pregnancy, instead of a storm against the toxic waste producers and similar actions towards the health authorities. The existing offers of examination are simply an alibi, meant to help pacify the victim.

To really curb the development of sickness in newborns, human-genetic counseling centers don’t make sense, but rather first of all the the sickness inducing environmental conditions and second the technological birthing machine-to which about 50% of all handicapping problems with newborns can be attributed must be done away with.

The human geneticists know only a vanishingly small number of “disorders or defects” which are genetically conditioned. The most important thing for them is to collect data for their researches and from the broadest possible sources (thus they refer to sicknesses ranging from alcoholism to cancer). It is here that the interests of the reproduction doctors, the genetic technologists and the precautionary doctors who work hand in hand, meet.

The concept of the “self-determination” of the pregnant woman is out of place in this context: Doctors determine the methods of examination, human-geneticists likewise the interpretation of the results, and the Para 218 laws determine the conditions of abortion. Looking back we have to say that the #218 campaign of the women’s movement stood in the (possibly unconscious) tradition of selection and exclusion of the handicapped. This is clearly included in the eugenic indication.

Self-determination is no longer a collective political and fighting demand against integration/submission to ruling relations but rather a legitimization for individualist processes. This individualization of political conflicts not only makes us weak, it is apolitical and allows us to lose sight of our utopias.

Let us express our solidarity with those who are rejected and excluded!

Let us attack those who destroy us!

Let us make common cause!