You are here: Home › Uncategorized › Terrorism and Revolutionary Violence: DPFLP 1970 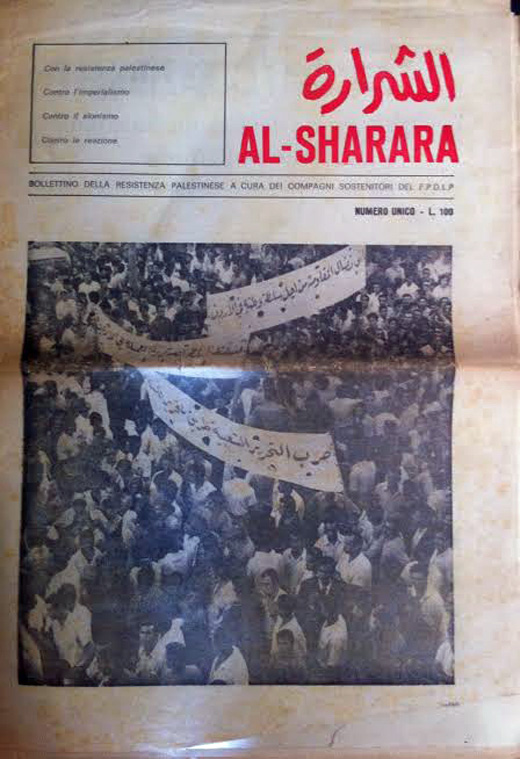 The recent explosion of the Swiss aircraft [possibly a reference to the February 21st 1970 downing of Swissair 330 killing everyone on board-Editor] was extensively manipulated by Israeli propaganda to slander and distort the position of the Palestinian resistance movement after the movement had won the sympathy and solidarity of large sections of international progressive public opinion. Despite the fact that the United Command (of the guerrilla organizations) had completely denied any of its members’ responsibility for the explosion, we feel that a clear and critical position on the strategy of “external operations” is necessary: The Democratic Popular Front had taken a public position on this question several months ago (see Al-Hurriyah Sept 12, 1969). That position can be briefly reiterated here:

1: There are two main types of Feda’i operations: one aims at developing Feda’i activity into mass armed action, while the other type concentrates on individual heroism and creates wide sensationalism similar to the “external operations.”

2: Each of these types has a different theoretical presupposition. Collective action, on the one hand. reflects faith in the masses and in the necessity of engaging broad sections of the people in the armed struggle. while making it clear that this requires immense human sacrifices – collective heroism on the part of participants who are ready to die fighting for their land. Individual action. on the other hand places terrorism ahead of collective mass action. This tendency consequently will inflict a heavy damage on the Palestinian resistance for it ties the masses with individual heroism instead of collective heroism and it places them in a position of observing the struggle rather than participating in it. It encourages individualist traits in the struggle instead of relying on mass action.

3: The example of Vietnam is very clear. The revolutionary movement could have easily sabotaged U.S. interests outside the borders of Vietnam. It rejected this form of action from the beginning for basic reasons rooted in the ideology of the Vietnamese movement. The Vietnamese refused to follow this strategy that leads to a difficult path and which would have ended in the glorification of individual exploits rather than direct mass participation. When the D.P.F. presented this position a few months ago it was not debating the extent of damage or gain that “external operations” would lead to: rather. it tried to expose the nature of those operations and the ideological and political effect they would have on the the consciousness of the masses and their revolutionary potential…which in effect is related to the transformation of Feda’i activity into a people’s war of liberation.

Historically, we find that reliance on individual action and terrorism was the solution of those who had lost faith in the potential revolutionary capabilities of the masses. Terrorism, in this sense, develops an illusory consciousness in the people; it portrays the struggle with the class enemy in an extremely simplistic way , . .with one bullet the tyrant is eliminated, the existing social relations are changed, and a whole class is removed from power. This conception of the struggle, “despite the heroism of certain individuals who committed acts of terror in history”, results in extreme damage to the mass revolutionary movement and its development. Lenin himself was sympathetic with similar acts of heroism which had demonstrated the revolutionary potential among some intellectuals, but he considered individual terrorism to be a glorification of spontaneity among the masses and to be an act belittling peoples’ revolutionary capacities. In What Is To Be Done Lenin placed terrorism on the same level with two other tendencies in the labor movement: spontaneity and economism.

“The Economists and the modern terrorists spring from a common root. namely subservience to spontaneity…At first sight, our assertion may appear paradoxical. for the difference between these two appears to be so enormous: one stresses the “drab everyday struggle,” and the other calls for the most self-sacrificing struggle of individuals. But this is not a paradox. The Economists and terrorists merely bow to different poles of spontaneity. The Economists bow to the spontaneity of the “pure and simple” labor movement. while the terrorists bow to the spontaneity of the passionate indignation of the intellectuals, who are either incapable of linking up the revolutionary struggle with the labor movement or lack the opportunity to do so. It is very difficult indeed for those who have lost their belief. or who have never believed that this was possible, to find some outlet for their indignation and revolutionary activity other than terror.”

Lenin: What Is To Be Done?

The conclusion which Lenin makes is very clear: Terrorism leads to belittling revolutionary mass action and it substitutes artificial stimulation for conscious political agitation among the masses. Individual terrorist action serves to glorify spontaneity and contributes toward keeping the masses at their original stage of consciousness, that is – under the control of the dominant bourgeois ideology at a time when the development of a mass political movement cannot occur without the uprooting of the prevailing ideology. This analysis may be applied to the conditions of the Fedayeen movement and its relationship to the masses. This relationship is still based on spontaneity and on leaving the masses victims to the prevailing distortions. Guerrilla warfare cannot develop into mass armed action by merely escalating armed activities but rather by the participation of the people themselves in fighting on the one hand and by their participation in the political and ideological debates within the ranks of the Fedayeen movement.

“Pure” military activity, as well as individual terrorism, can only lead to the degeneration of political activity among the masses and hence the weakening of the link between armed activity and the mass movement. What do “external operations” represent in this context? Those acts responding to the enemy through individual terrorism do not threaten him in the final analysis, nor do they affect the balance of military power which still operates to the enemy’s advantage. Rather, they create a great deal of noise and a tendency to substitute individual deeds for organized armed action. The masses, on the other hand, found in those courageous acts a psychological release from the defeat of June 5. 1967 and discovered in them the heroism that they thought was absent in the war with Israel. We must not overlook, however, that the Fedayeen who participated in those actions exhibited potential revolutionary capabilities which was released in the particular form of individual heroism. Unfortunately, this revolutionary potential was spent in fragmented terrorist actions and not in collective sacrifices . . .i.e., the development of protracted people’s war.

Individual violence has no faith in the viability of mass participation, which is the natural basis of a people’s war against an enemy who is far more advanced in military power and technology. What the Vietnamese experience proves is just this. In Vietnam, guerrilla warfare developed into full scale people’s war. not through individual heroism – “external or internal” – but by the expansion of the struggle among the masses, through engaging them in armed activity, raising the people’s political awareness and organizing them. The ability of the Vietnamese to grow until it reached the level of subduing the machinery-the military might of the United States-was a direct result of the translation of the theory of people’s war into the Vietnamese situation. Military activity tended to escalate only in the context of increasing political consciousness – diverted from spontaneity.

Let us discuss then the question of striking at imperialist interests that became the object of those “external operations” which, in some circles, were considered as a revolutionary strategy for Feda’i activity. Individual violence (terrorism) considers those imperialist interests as separate concerns distributed throughout the world, and, hence, it becomes the task of Feda’i activity to hit and pursue those interests everywhere and anywhere it can reach them. This is a misconception of the nature of imperialist interests. To put them in correct perspective, one must regard those interests as the combined political and economic relations in the Arab world that have become the stepping stones for imperialism in our land. The foundation of these interests lie in the (Arab) ruling classes linked to international capital. Imperialism, in turn, protects its interests either in a direct military manner (where the local ruling class is unable to perform a task). as is the case with British troops in the Arab Gulf region, or indirectly, by extending aid to those ruling classes that are tied to imperialism.