You are here: Home › area of autonomy › Social War in Italy-February 1978 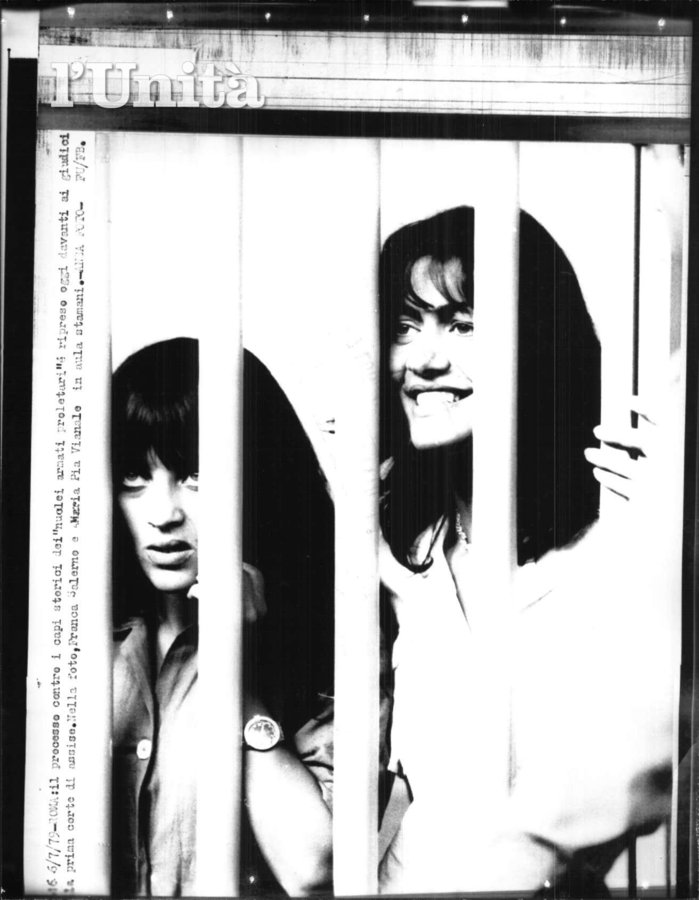 Rome: The court rejects the request for the residential detention of Marcello Blasi of the Via Volsci Collective made by the public prosecutor’s office and revokes his arrest warrant. The following day the precautionary arrest warrants against Vittoria Papale and Graziella Bastelli are also revoked and a new request for provisional residential detention also charging Ricardo Tavani will be issued.

Naples: Clashes between police and the unemployed in front of city hall.

Cosenza: Three armed militants of PFG enter the HQ of the banking conglomerate Cassa di Risparmio di Calabria and after immobilizing the staff member on duty destroy the data processing center with an explosive charge.

Bologna: Clashes between police and militants of the extra-parliamentary left during a demonstration.

Milan: An armed commando of five youth, including two women, attack the HQ of Radio Radicale in Porta Magenta. After immobilizing the three persons present in the offices, they insert a cassette into the tape player. Following music, the tape plays a message in which the “Communist Combatant Formations” claim responsibility for the “military occupation” of the radio station defining it as a “channel of bourgeois propaganda”. The tape also claims responsibility for an action on January 18th in which a commando carried out an attack on some carabinieri providing security in the vicinity of a special prison.

Rome: Appeals process against NAP militants Maria Pia Vianale and Franca Salerno. After being taken to the Palace of Justice the two women refuse to enter the courtroom. At the request of their defense attorney, the process is delayed till July 25th.

Padua: Slightly more then two months after the first, a second suspension of classes in Political Science occurs. The cause of this new measure is yet another episode of intolerance towards Angelo Ventura, professor of modern history (and member of the PSI), and the interruption of a faculty meeting to discuss the issue by a group of students.

Rome: Clashes between police and left militants protesting the introduction of residential detention in the city center. Numerous cars are burnt. Serious damage to businesses. Fourteen arrests and many injuries.

Rome: Following a telephone call to the Corriere della Sera, the police find a leaflet in a phone booth. The leaflet signed “Neighborhood Brigades”, declares: “We will strike the churches, barracks, police stations, bars and hangouts of the fascists”, and specifies the operations of the Brigade will be carried out in the Salario-Parioli area.

Rome: Six people, five from Potenza and one from Naples are allegedly arrested by carabinieri following a raid on an apartment in the vicinity of the Termini railway station. According to the carabinieri, they had been participating in attacks in various cities throughout Italy: They try to prove this with an extensive correspondence and series of documents found in the apartment. The state prosecutor confirms the measure, not for “formation of an armed gang” as wanted by the carabinieri, but for “subversive association”.

This news will prove false. On the 10th of February it is learned that in reality the group had been arrested at the Termini station at 8 in the morning on the 23rd of January. The youth had returned from Palermo after attending a southern conference of Worker’s Autonomy. A telephone tip from an informant had indicated the presence of armed militants on the Palermo-Rome train. No weapons were found on the person or in the homes of the arrested, only leaflets and booklets.

Potenza: Clashes between groups of students and the police during a demonstration launched in protest of the arrest of the six students charged with subversion in Rome on the 6th.

Cagliari: During a demonstration of metal-mechanical and chemical workers, windows are smashed.

Trento: Occupation of the Trento Department of Sociology. It will be evicted two days later by the carabinieri.

Bologna: An incendiary device is thrown at the entryway to the home of professor Carlo Sacchi, president of the women’s trade school “Elisabetta Sirani”. The action is claimed by “Proletarians organized for Territorial Counter-Power”.

Milan: Three cars belonging to leaders of the DC are torched over the night. The actions are claimed by the BR.

Pratto: A commando of three break into the office of Gianfranco Spighi, notary of Firenze. He is shot and the three flee. The next day, the police and carabinieri allege they have identified Elfino Mortati (18 years old, described as a leader of the area of autonomy in the locality) as one of the men in the commando. Mortati goes into hiding. Later, following an anonymous telephone call, a flier is found with a claim of responsibility. It is signed “Armed Struggle for Communism” and calls the killing of the notary an “accident on the job”.

Rome: Daniele Pifano, of the “Collettivo Policlinico”, included in a trial charging sixty one persons, is arraigned for a series of felonies committed between 73’ and 74’ at the Umberto hospital. Pifano denies having committed the felonies, protests his innocence and insists on the legitimacy of the initiative carried out at that time.

Rome: Clashes between police and students during a protest demo against residential detention. Four arrests.

Turin: A bomb attack seriously damages the church of Carmine in the city center. The attack is claimed by Revolutionary Action (AR).

Milan: A commando of masked militants assault the offices of Candido, the weekly edited by MSI senator Giorgio Pisanò. Windows are broken and molotovs thrown. This causes a fire which partially destroys the news room and damages the print shop.

Enna: Three molotovs are thrown at the offices of the provincial federation of the MSI. Minor damages.

Rome: Riccardo Palma, working magistrate to the director general of the institute of prevention and sentencing with the task of management of funds for prison construction is struck with a burst of machine gun fire by a commando of three men, waiting for him at his doorstep, around 9 in the morning. The action is claimed by the BR in a telephone call to a press agency. That evening a leaflet is found in a telephone booth which says among other things “Palma’s specific task consisted of the scientific planning of the total destruction of communists and imprisoned proletarians, through the application in the prisons of the most modern experimental techniques of international imperialism: white cells in whitewash, visits with intercoms and glass, exercise yards which are roofless cells…”

Milan: Domenico Segala, Alfa Romero executive attached to the personnel office, is shot in the legs by a commando of two militants waiting on his doorstep around 8 in the morning. They flee in a car driven by an accomplice. The action is claimed in a telephone call to the Milan newsroom of ANSA by the “Combatant Communist Association”.

Padua: A youth demonstration in various Padua university institutions demands the suspension of teaching activity, the concession of a “political vote” on exams, and the abolition of temp work. Two professors of the Physics Department are beaten. A student is arrested.

Bologna: Provisional liberty for two detained in the incidents of March 77’, Alberto Armaroli a traffic cop accused of being on the barricades, and Carlo Degli Esposti. However it is denied to other defendants accused of carrying molotov cocktails. The dismissal of the request for provisional liberty cites the Reale law.

Naples: The car of the DC assessor of the municipal police, Franco Tassello is burnt and destroyed.

Catania: An arson attack is carried out against the offices of the MSI. Minor damages.

Turin: The names of six jurors are extracted for the trial against the BR. The names will remain secret till the first court date scheduled for March 9th. Two thousand officers are expected to provide security for the most at risk persons.

Milan: During a wide ranging police operation,surgeon Mario Moretti, and law graduate, are detained in the offices of the Worker’s Voice newspaper and accused of receiving stolen goods and participation in an armed gang. Giuseppe Forlano, coffee shop owner is detained in Turin, is charged with attempted massacre, fabrication, possession and abusive use of explosive materials, grand theft, and subversive association.

Milan: Supporters of the far right attacked and beaten in a bar.

Milan: Several hundred autonomists break off from a student march and engage in a furious battle with the police, throwing stones and molotovs and firing handguns, one of which injuries a bystander.

Milan: Clashes during a student demo against “repression in the school”. A woman is slightly wounded by gunfire. At the end of the demonstration, two pistols are found in a drum.

Milan: In Assize Court, Giovanni Battista Miagostovich, faces four counts of attempted homicide and a charge of participation in an armed gang.

Bologna: A group of militants of the “Communist Combatant Nuclei” break into the offices of the Small Business Association and devastate it.

Padua: Prisoners in Padua launch struggle. After the suicide of a prisoner, the “Proletarian Prisoner’s Movement” begins two days of agitation. The goals are the implementation of prison reform, the abolition of special institutions, and decriminalization of minor charges.

Rome: Police evict an occupation on Viale Adriatico of the building which had previously been the HQ of the fascist youth movement GIL. The building had been occupied for some weeks by various participants in the University “movements of struggle”. There is a protest march against the eviction with two arrests.

Milan: A bomb explosion damages the entryway to the administrative offices of the Corriere

Rome: The BR shoots the deputy director of Cassa di Risparmio, Giorgio Borghetti, in the legs.

Padua: Two professors of the Law Department are held captive by extreme left militants for some time.

Portogruaro: The car of Lorenzo Marotta, DC councilor, is destroyed in an attack.

Rome: Luciano Pizzoli arrested in his home, friend of the already imprisoned Luigi Rosati, the accusation against Pizzoli is formation of and participation in an armed gang.

Rome: Torching of a police car and carabinieri van. The action is claimed in a telephone call by “Armed Struggle for Communism”.

Milan: Firebombing of a traffic police parking garage. The action is claimed in a telephone call by the”Nuclei of Armed Proletarians” and the “Armed Worker’s Squad”.

Rome: Low sentences in appeals court for NAP militants, Vianale and Salerno: Two years for the first and three for the second on illegal weapons charges.

Rome: Serious clashes between students and police in the city center. In the course of the fighting, public buses are destroyed by fire. Offices of the DC and MSI are destroyed. A grocery store is ransacked. Dozens of arrests and injuries.

Rome: Gianfranco Palumbo, Michele Jannuzzi and Giuseppe Bochiccio, arrested with three other students on the 6th and accused of subversive association, are released due to lack of evidence. The other three remain incarcerated.

Bologna: Five offices of the DC and a Communion and Liberation library are attacked.